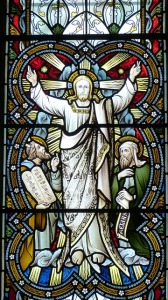 “When the disciples heard this, they fell prostrate and were very much afraid. But Jesus came and touched them saying, ‘Rise, and do not be afraid.’ And when the disciples raised their eyes, they saw no one else but Jesus alone.”
Mt. 4:11

“We… look upon the transfiguration above all as the celebration of that presence of Christ which takes charge of everything in us and transfigures even that which disturbs us about ourselves. God penetrates those hardened, incredulous, even disquieting regions within us, about which we really do not know what to do. God penetrates them with the life of the Spirit and acts upon those regions and gives them God’s own face.”
Kathryn Spink

Every year, on the second Sunday of lent, we hear the story of the Transfiguration of Jesus. It seems like an odd time to hear this story which so clearly foreshadows the resurrection. Some scholars speculate that we read this story near the beginning of lent to give us the courage to persevere in our lenten discipline.
I have a different theory, at least for this lent as we focus on being forgiven.
Read as a story of forgiveness, the Transfiguration takes on new meaning. Jesus reveals His glory to Peter, James, and John. He also reveals their need for forgiveness. They are confronted with Jesus’ majesty and see how pitiful they are in comparison. They fall short of their calling. Jesus glory confronts them with their sinfulness. They fall prostrate and are overcome by fear. They see their brokenness for what it is. In the light of the Transfiguration, sin is exposed for what it is.
But the story doesn’t end there. After revealing His glory (and the disciple’s sinfulness), Jesus comes to them with the healing words, “Rise, and do not be afraid.” They are forgiven. There is still a long journey of healing and transformation ahead, but Jesus assures them that he will be with them. He is not a judge, but a savior. He does not condemn but forgives.
What is true for Peter, James, and John is also true for us. Jesus brings us face to face with our sin. He does not let us off the hook. The close we come to His glory, the more we realize our need for forgiveness. But the story doesn’t end there. Jesus also assures us that He is our savior, not our judge. He releases us from fear and invites us to continue to follow Him.
We are forgiven. Let’s follow Jesus!

This is a dangerous Gospel.  It is dangerous because we misinterpret Jesus teaching in two ways.

The other mistake we often make in understanding this teaching is to think that Jesus wants us to “try harder” at being good.  This can play into our natural perfectionism and lead to burnout.  We get so busy trying to be good that we lose track of what God wants from us. Inevitably we will fail to live up to this teaching of Jesus.  This failure throws us into the arms of the merciful Father (the very Father we are called to imitate) who “makes his sun rise on the bad and the good, and causes rain to fall on the just and the unjust (Mt. 5:45).”

“His Father ordered his servants, ‘Quickly bring the finest robe and put it on him; put a ring on his finger and sandals on his feet. Take the fattened calf and slaughter it. Then let us celebrate with a feast…’”

In the parable of the lost son (Lk. 15), the father welcomes his younger son back with open arms. This is the son who asked for his inheritance early and left his father behind to pursue his own selfish ends. It is for this son that the father throws a party.

Like the father, Jesus embraces those who have left God behind to pursue their own desires. And that is a great gift to us. We, the church, are like that younger son. Each one of us has chosen to leave God behind in some way. Jesus welcomes us to the divine feast. That’s grace.

But grace doesn’t stop there. The grace of God’s mercy cannot be contained. If celebrating our own salvation becomes all we do, we have turned salvation into another selfish goal. We have owned it and forgotten that it is a gift. It is true that we have been included in the Father’s feast, but God’s mercy flows beyond our selfishness.

Like the servant in the parable, God’s grace empowers us to prepare the feast. When God’s mercy touches a human heart, we, the church, are there to rejoice and celebrate. We aid the repentant sinner and embrace them, showing them a new way of life. That’s grace. But God’s grace doesn’t stop there.

Imagine the end of the parable. The elder son is standing alone while the party continues inside. He hears the joy and laughter but can’t bring himself to go in. Imagine the younger son coming out of the party to embrace him. He and the father listen to him and meet him in the midst of his anger and pain. After hearing him out, they apologize for their own failings and invite him in to share the feast. That’s grace.

God’s grace has been poured into our hearts…. but it doesn’t stop there. It has been given to us to be shared.

You forgive not in order to change the other person, but simply to follow Christ.

By forgiving us, God buries our past in the heart of Christ and brings relief to the secret wounds of our being.
Br. Roger of Taize

“Father, we acknowledge your greatness: all your actions show your wisdom and love. You formed us in your own likeness and set us over the whole world to serve you, our creator, and to rule over all creatures. Even when we disobeyed you and lost your friendship you did not abandon us to the power of death, but helped all to seek and find you. Again and again you offered a covenant to us, and through your prophets taught us to hope for salvation. Father, you so loved the world that in the fullness of time you sent your only Son to be our savior.”

Many of us struggle, not so much with understanding the message of forgiveness, but with living in the reality of it.
John Ortberg

“When we proclaim that someone is subhuman, we not only remove for them the possibility of change and repentance, we also remove from them moral responsibility.”
Desmond Tutu